Are you ready for Adventure? Then you need to try Coasteering in North Devon

We’ve finally had a glimpse of sunshine, and if you’re anything like us, this will have got you thinking about getting outside and exploring! Now, we know that the idea of getting in the sea might send a chill down your spine right now (unless you’re a surfer, of course!), but temperatures are only going to be warming up over the next few months, so we thought we should talk about a really exciting activity that you can try out this spring and summer.

That’s right – coasteering, and we wanted to tell you a little bit about this amazing activity so that you can get out and experience it for yourself!

Coasteering in North Devon is an adrenaline-filled adventure perfect for schools, stag ‘dos and any extreme-sports fan. Keep reading to discover what it’s all about.

You can also watch this video on Youtube
So, what is coasteering? Well, coasteering combines coastal scrambling, sea swimming and low-level cliff jumping in one exhilarating activity.

Coasteering has become a popular activity all over the world, but the west coast of the UK remains one of the best places to experience this awesome activity.

On a coasteering adventure, you will first hike down to the coastal location where we will begin our coasteering experience. We will then get into the real deal, scrambling across the coastal boulders, traversing around rock pools and negotiating the route to our jumping point. Then, you will climb to a safe spot from which to jump and plunge with a great splash into the sea. Emerging from the water, you will then swim back to the rocks.

Coasteering is a great way to get a rush while also enjoying a dynamic experience of the North Devon coastline. During your adventure, you will see spectacular landscapes, and get up close and personal with the flora and fauna of the coastline.

Is coasteering the same as canyoning?

There are also various other differences between these activities. Coasteering is the perfect activity for mixed-ability and age groups, as it is very inclusive and achievable for most people. Canyoning, on the other hand, usually requires participants to abseil – and from greater heights – meaning that you really have to commit, as well as utilising safety skills.

The other differences between canyoning and coasteering are the activities involved. Coasteering involves a lot more jumping and swimming, and you are also more likely to see wildlife such as fish, seals and sometimes even dolphins!

As with any adventure activity, there is some level of risk involved in coasteering. However, our instructors are experts in mitigating the risks to bring these environmental factors down to a manageable level. We will only go coasteering in good conditions, where tides and weather present a safe environment.

During a coasteering experience, no ropes are used to attach participants to the rocks – however, there are spotters for safety where appropriate. All participants wear a buoyancy aid and helmet. All instructors are also first aid qualified so that in the unlikely case of an emergency, we can do what is needed to keep everyone safe.

We always follow national industry coasteering protocol, and work in small groups so that our experienced coasteering instructors can make sure everyone is safe, happy and having a great time!

Who is coasteering for?

The great thing about coasteering is that almost anyone can do it! We do, of course, have a minimum age to participate for safety reasons, but above the age of 12, anyone who can swim is able to take part in this incredible activity.

Coasteering is a unique and exciting activity for birthday parties, youth groups, stag and hen ‘dos, corporate team building events and so much more. It’s a great way to bond, build confidence and learn outdoors skills – whilst having a whale of a time!

The history of coasteering

Coasteering actually originated in Devon, as it was first discussed in a guidebook for rock climbing in the region. In the book, Sea Cliff Climbing, authors John Cleare and Robin Collomb state that “a few enthusiasts believe that coasteering will become popular and has a big future”. They were right. In the 1990s, commercial coasteering emerged as a recreational activity along the Pembrokeshire cliffs in Wales.

It wasn’t until the early 2000s, though, that the word ‘coasteering’ came into general use to describe the activity. Coasteering developed as a combination of climbing and orienteering, but it has changed a lot since its conception to become what it is today.

What to take coasteering

So, you’re interested in going coasteering. What do you need to bring along for your adventure? Well, we provide all of the essential equipment, such as wetsuits, life jackets and helmets. You will need to bring along swimwear, a towel to dry off and some old shoes to wear for extra grip on rocks.

This is all you need to participate in a coasteering session, but you are welcome to bring along gloves if you tend to get cold hands, or wear a rash vest under your wetsuit! Of course, we also recommend that participants wear water-resistant suncream during their coasteering adventure, too, to protect from the sun.

When to go coasteering

Technically, coasteering is a year-round activity. But there’s no denying that it’s more enjoyable when the weather is a bit warmer! Luckily, though, as you’re going to be getting wet in the sea anyway, rain isn’t an issue. The only thing we really depend upon is the tide. We need to make sure tides are far enough in that you can jump from the rocks into water of a safe depth, but also that we will easily be able to get back onto the beach after our session. It’s also important that the tides and surf are safe enough to swim in – but don’t worry, we research all of this before taking groups out!

Where to go coasteering in North Devon 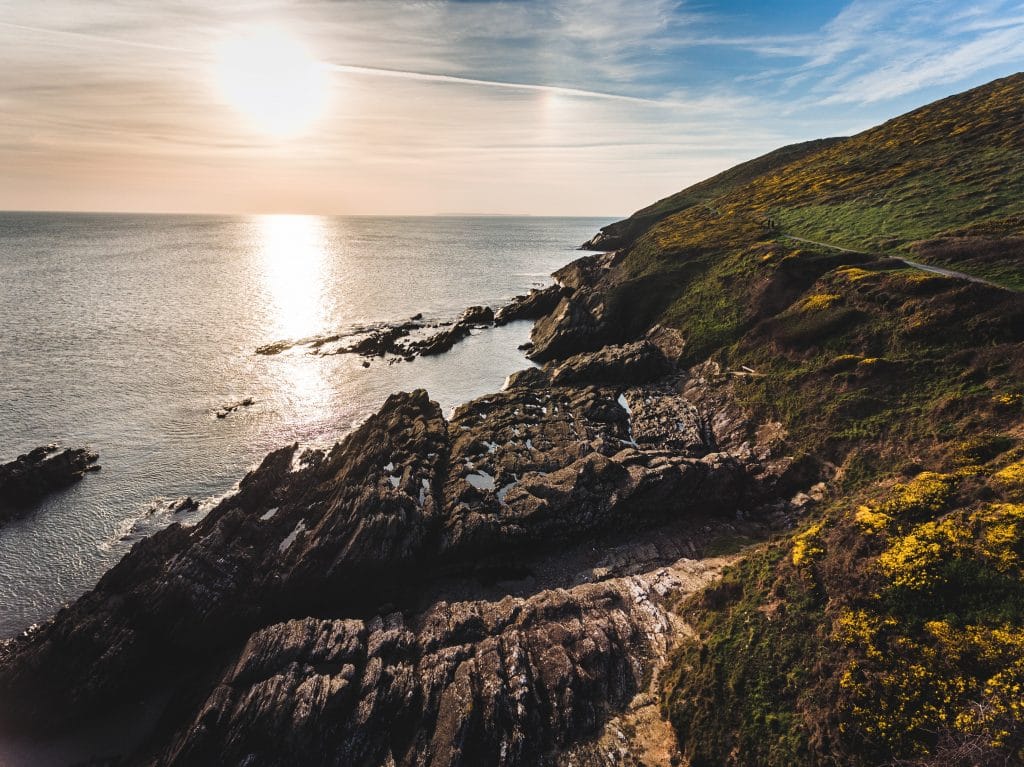 Possibly the most famous location for coasteering in North Devon is Baggy Point. Located in Croyde, Baggy Point is actually one of the best places to go coasteering in the UK. There are lots of exciting routes here to try, such as ‘Swirly Gully’ and ‘The Waterfall’, along with unique features such as curious caves, striking rock formations and huge gullies to explore. Here, there are plenty of jumps, large and small, making it a great spot for first-time coasteering groups. 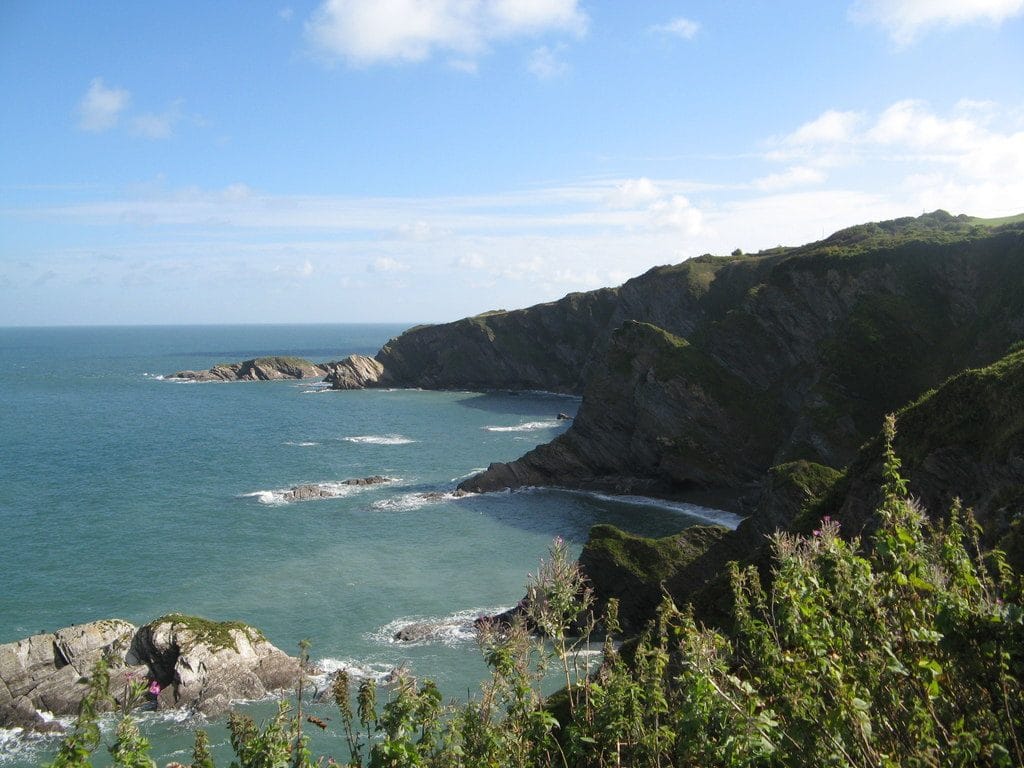 If you’re looking for something a bit more advanced, then Hele Bay is the perfect choice. Located just outside of Ilfracombe, Hele Bay is ideal for those who have been coasteering before. It features more advanced routes, including bigger jumps, longer swims and more technical rock. Routes at Hele Bay include ‘Tide Race Gully’ and ‘The Washing Machine’. These are located beneath some of the highest and most dramatic cliffs in the area.

There are also a number of other places to go coasteering in North Devon, including the quiet cove of Combe Martin with its dramatic headlands, and Woolacombe Bay.

So, if you’re looking for an activity that will get your pulse racing, it doesn’t get much better than coasteering! Give us a call today on 01769 309 003 to book in a coasteering session for the experience of a lifetime!

Take a look at the many activities you can do here at Rock & Rapid...

An Easter of Adventure with Rock and Rapid Kids’ Activity Week

Get your kids in the adventurous spirit this Easter holidays with Rock and Rapid Activity Week! We know how hard…

A Successful Weekend at our Interschools North Devon Climbing Competition

Last weekend we held our annual interschools climbing competition, and it was a great weekend! Every year, we invite all…

So your child’s birthday is fast approaching, and they’re asking what they’ll be doing for their big birthday party. If…